Of course, the situation for both teams in the standings is quite unobvious. Josep Guardiola’s team was talked about as almost a champion a month ago, but now Liverpool is only three points away, so each new misfire of the Citizens is perceived with fear for them. As for the Red Devils, there was a struggle for the very fact of the presence in the zone of European Cups with little hope of making it to the top 4 best teams in the country by the end of the season.

The derby for United did not start with the most optimistic note. In the fifth minute, the defenders did not keep de Bruyne in the centre of the penalty area during a shot by Bernardo Silva from the left flank, after which Kevin shot the goal. Starting in a similar vein at the Etihad is not the best prank, but Rangnik’s team then managed to avoid the usual rink for rivals, which the Guardiola players like to arrange for visiting teams. By the way, in you want to win more with huge bonuses, higher odds, and without risks – visit our online betting site rankings page.

The visitors really didn’t have many opportunities to score, but they still managed to find problems in the other’s defence, so success in one of the counterattacks was a predictable phenomenon. United didn’t need advantage on the ball at all in order for Pogba to take Sancho into the open space at the entrance to the left flank of the penalty area in the 22nd minute. Then there was only the matter of technique, although Jadon spent a long time preparing the final blow in the far bottom corner.

Read more: Pioli: Inter is still a favourite to win in Serie A.

Rangnik’s team’s problems in defence were a factor that was constantly criticised by fans of this season. In such status matches as the reporting one, all these small shortcomings were very noticeable. As a result, United conceded in the first half after Lindelof did not jump out in time to intercept Foden’s interesting manoeuvre, and Maguire was then unable to take the rebound from de Gea out of the penalty area. De Bruyne was very cold-blooded, shooting a free corner again.

In the second half, City had a complete advantage in control of the ball and the situation. In fact, United was not too embarrassed by this situation on the outside, so the guests tried just to endure while rivals rolled them along and across. Giving so much space to the Citizens is a thing that cannot be forgiven, and in fact, no one was going to forgive Ralph Rangnik’s team. The Red Devils conceded the third goal in the 68th minute when Marez successfully caught a pass from de Bruyne from the corner on the left flank to the far entrance to the penalty area.

Obviously, with three effective actions, Kevin could be awarded the title of player of the match ahead of schedule, so even in this matter, there was no special intrigue. De Gea saved his net until the final whistle, but before the start of the compensated time, he was shot in the melee for the fourth time by Riyad Marez, and the referees, after studying the offside of the transfer to the Algerian from Gundogan, decided to legitimise the goal. It didn’t spoil the atmosphere for Manchester United because everyone could see what was happening on the field. In the next round, Manchester City will play away against Crystal Palace, and Manchester United will host London’s Tottenham. Want to know more about football news in India and don’t miss the important news? Subscribe to footbal24.in and receive the latest updates to your email. Liverpool and Arsenal did not score in the first leg of the semi-final of the League Cup
January 14, 2022 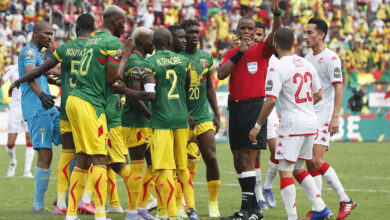